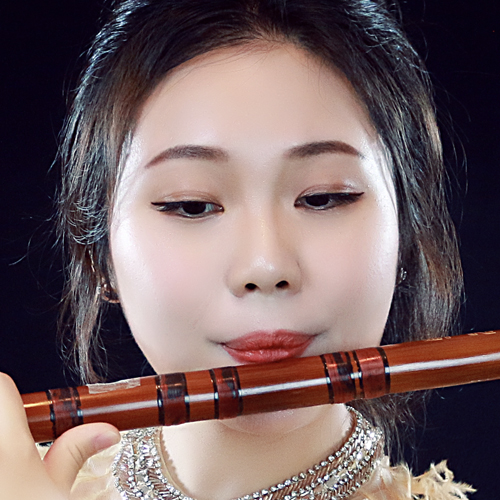 She learned to play bamboo flute under the tutelage of Mr. Zhan Yongming, the famous flute performer, educator, and doctoral supervisor of Shanghai Conservatory of Music. On the other hand, she started out her guzheng journey under the guidance of Ni Lei, a guzheng performer, then pursued further study of guzheng under the instruction of Ms. Wu Yang, a famous performer.

She has been involved in a variety of TV music programs, large-scale performances and recording work over the years. She was also invited to be a special guest star featuring in the movie “Tiny Times 3”. In addition, she has participated in the variety show “I Love the Voice” produced by Zhejiang Satellite TV.

She set up Magic Eastern Music Studio while living in the US. Magic Eastern Ensemble consists of vigorous young talents was formed under her efforts. She has been committed to promoting the traditional national instrumental music culture and the cross-border new folk music that conforms to the aesthetics of Western music culture. She was given the opportunity to perform some adapted music such as Kangding Love Song, with the support and encouragement of Christina Liang, the famous Taiwan composer, music creator, and the winner of the 21st Golden Melody Awards for Traditional Arts and Music. Many local Americans and Chinese Americans have developed a great interest and acquired a new understanding of traditional Chinese instruments through these music works that are combined with electronic music, jazz and traditional musical instruments. In recent years, she has been invited by the University of North Georgia, Emory and other well-known universities for exchange performances and New Year concerts. She has also performed in Gwinnett 200th Celebration, NAAAP Atlanta events , Atlanta international nightmarket and major international cultural and arts festivals.

Apart from being invited to give lectures on folk music and concert performances, she has also led the Magic Eastern Ensemble to participate in various major arts festivals in Atlanta, including the Atlanta Chinese IT Association, the Chinese Business Association of Atlanta, and some major performances of Chinese groups. The idea that folk music can be passed down and rejuvenated has been well implemented. Therefore, under her leadership, the form and content of the orchestra have received wide praise and unanimous recognition.